Keep Christ out of Xmas. 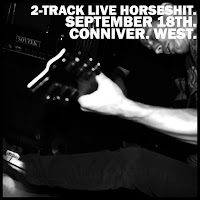 Here's our little holiday gift to everyone... just us doing our part for the war on Christmas. Live recordings of 2 new songs: "Conniver", and "West". We're going into the studio at the beginning of the year to lay down these tracks for a split that we will be announcing very very soon. Big thanks to our buddy Sir for recording this for us; it was recorded at our tour kick-off show in September on a small Tascam handheld 2-track recorder, so it obviously can't be the greatest quality, but we were all pretty surprised with it. Crank your volume.

None at this time.